Frank Kruppa (’66) will be featured in a National Geographic documentary later this year for his role in saving three pilots from a fiery DC-8 crash in Cuba almost 26 years ago. After seven years in the Air Force, he completed a 35-year career as a civilian fireman for the Navy. He and his wife live in The Villages, FL.

I just wanted to pass along, that I found on the Smithsonian Channel the episode of Frank Kruppa’s life saving efforts explained above.  Season 13 Episode 5.

Thank you for your service Frank!

Mary Ann Rees (’66) was honored by having the College and Career Classroom at Bishop Hartley High School in Columbus, Ohio named in her honor. She taught science and served as the school counselor at Bishop Hartley for 43 years. She holds a B.A. Degree from St. Mary of the Springs and a Masters Degree in School Counseling from the University of Dayton.

He taught Latin at Ursuline High School and retired as a school psychologist from Youngstown City Schools.

Always a loyal supporter of Ursuline, George was honored as Alumnus of the Year in 2008. He was a member of the Booster Club and cheered on the Irish for years at football, boys and girls basketball, baseball and softball games.

He was also well known as a stained glass artist, whose works were treasured by those who received them. George was an avid runner, racquetball player, ski enthusiast and golfer, having been a member of the YMCA for many decades.

As a school psychologist, George tutored students in his home, passing out nickels for good work.

George married Barbara Schmolder on July 4, 1964 and celebrated 55 years of marriage on their last anniversary. After meeting in Latin Class at Youngstown College, they spent their years traveling, enjoying lifelong friends, attending events at Ursuline and Cardinal Mooney High School and raising their children, David and Amy.

He was a member of Holy Family Church for almost 50 years and was a major believer in parochial education.

George is survived by his wife, Barbara; his son, David (Sharon) of Painsville and daughter, Amy of Poland. He also leaves to cherish his memory, three brothers, Robert (Patty Miller), Jack (Becky) and Michael (Joyce); one sister, Sally (Reese) Orlosky and many nieces and nephews.

His parents and sister, MaryAnn Banks, preceded him in death.

A celebratory luncheon will be held immediately following the mass at the church.

The family would like to thank Doctor Charles Wilkins, the staff at Briarfield Manor, The Inn at Poland Way and Hospice of the Valley.


Nick, the 35th Annual Youngstown Day had about 20 Ursuline grads, a great representation evidenced by our singing of the UHS Fight Song.  Great to see Bill Gambrel and Ron Mullins.  Jim Tressel gave an inspiring overview of accomplishments at YSU.  The photo is of Jim and three Dana School of music graduates celebrating the 150th anniversary of its founding.  I hope Ursuline grads in Florida at this time  next year attend and support both UHS and YSU.  David Novak 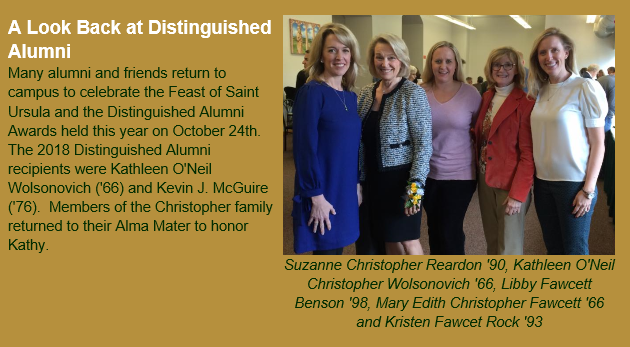 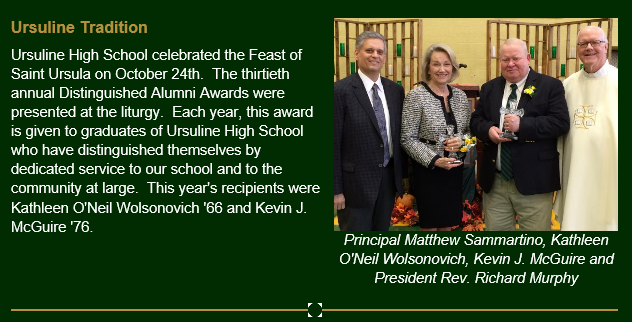 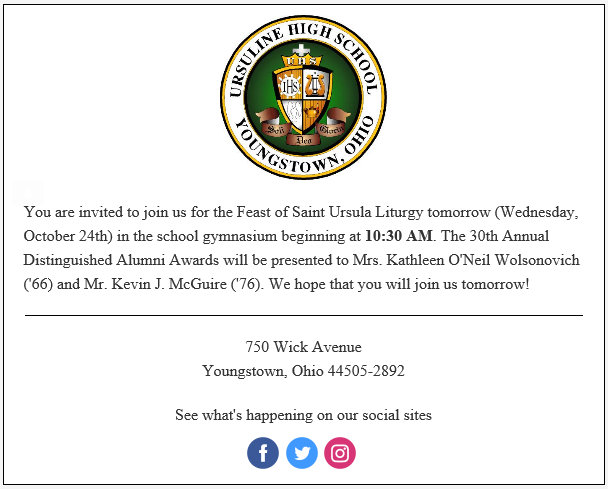 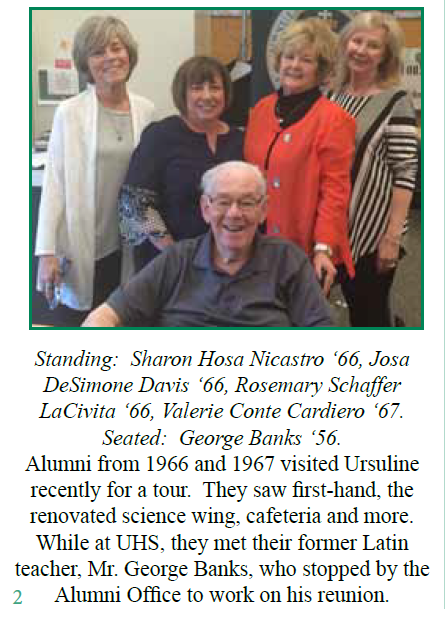 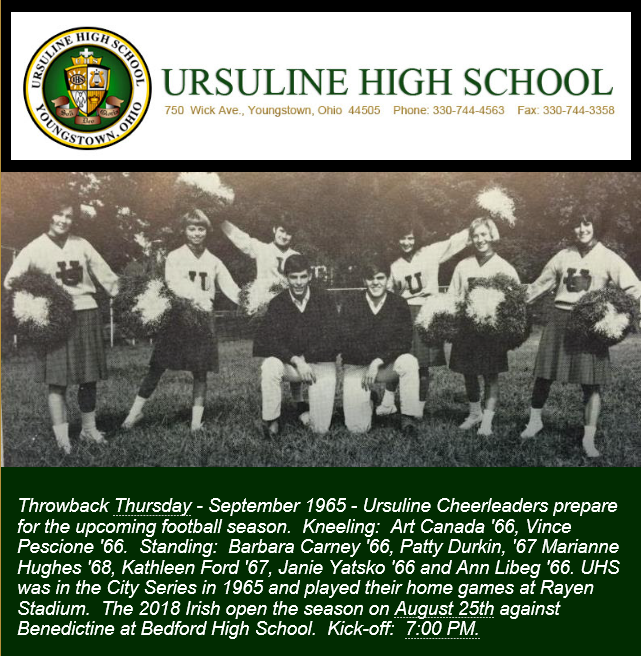 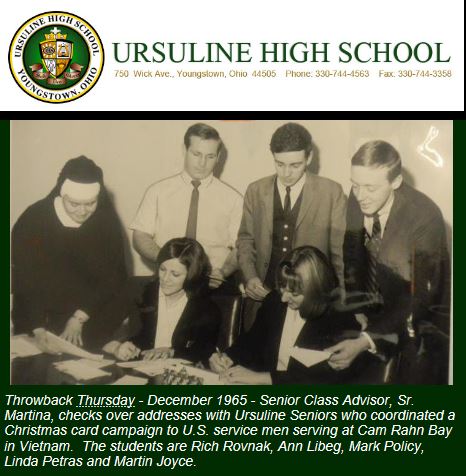 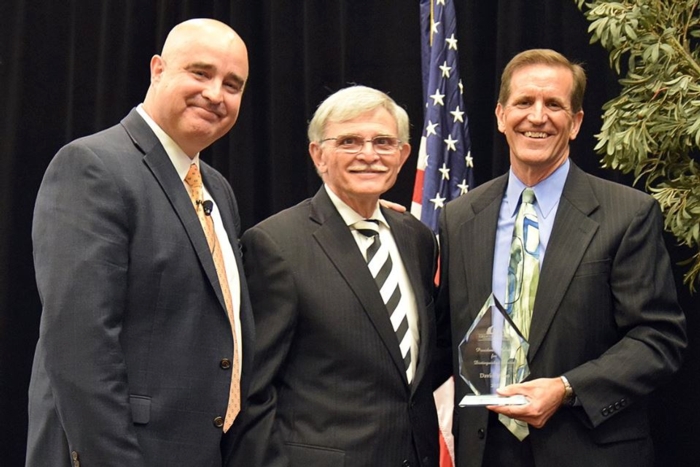 David Bruno of ZRG Partners, LLC is the first ever recipient of the Presidents Award for Distinguished Service!

A fact you probably "Did Not" know about Ron Hagan !!! 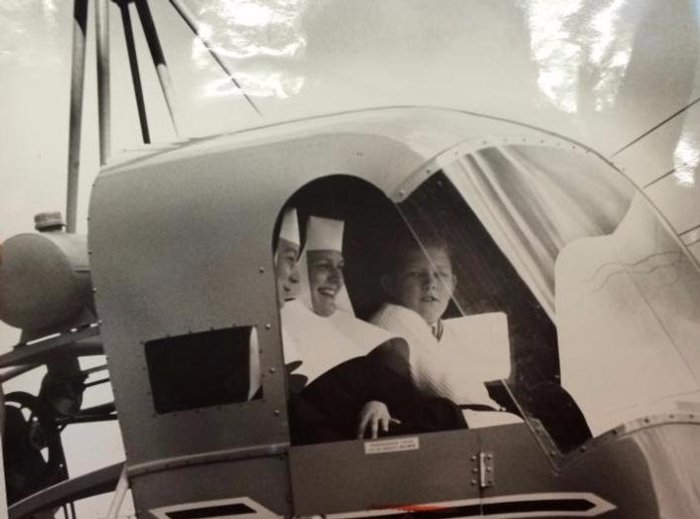 Throwback Thursday - March 23, 1962 - Ursuline Sisters Mary Leah and Mary Bernard take a helicopter ride with Ronald Hagan '66.  The helicopter, three-fourths the usual size, could hover no more than 12 feet over the Ursuline turf. 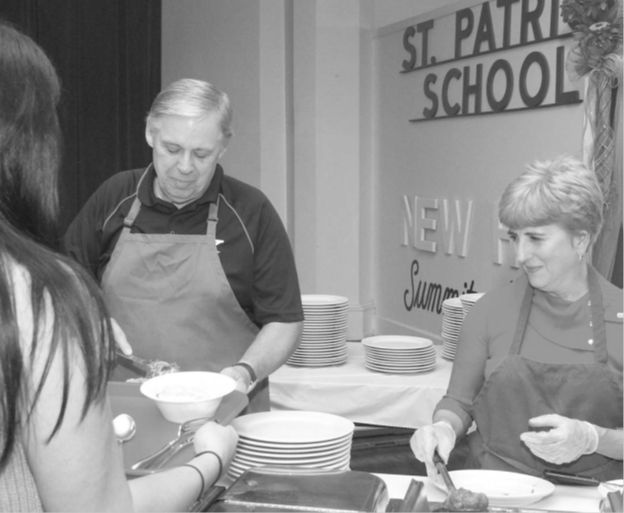 Mickey Conway of Boardman and Loretta Moore of Youngstown

Sharon Nicastro donated one of her kidneys to a stranger in San Diego. In exchange, John, her husband of 48 years, received a kidney from a Columbus woman he’s never met.

“If you feel you can do it, and can live without one kidney, you should do it,” Sharon said. “You can bless two people with your gift.”

It’s called living donation, and the couple learned about it from their daughter, Elyce Nicastro Ervin, a University of Toledo professor. 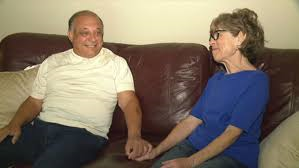 Last month marked one year since John got his new kidney and Sharon donated one of hers.

“I really feel blessed,” John said. “It’s like I got a new battery put in.”

He was diagnosed in 2006 with chronic kidney disease.

For years, John suffered from fatigue and chest and shoulder pain, but stress tests never indicated he had a problem. In 2014, Sharon persuaded her husband to undergo a colonoscopy. During that procedure, John’s colon was nicked.

That’s when doctors discovered blockages to his heart. Some of them were 100 percent blocked.

He underwent open-heart surgery and that led to his kidneys shutting down.

“It was three times a week for four hours.” John said.

Dialysis hampered his ability to enjoy life. If the couple went away for vacation, they had to find a dialysis clinic where John could get a treatment.

If they wanted to take a weekend trip, they had to be back by Sunday because John had a dialysis session scheduled for Monday.

He decided a year would be as long as he could take it. The couple looked into the living-donor idea.

Sharon wasn’t a match to John, and a transplant coordinator at a Mahoning Valley hospital told them they were too old for the living-donor program. They were directed to register at a few hospitals to try to get a cadaver kidney.

One of those hospitals was the Cleveland Clinic. A transplant coordinator there told them their ages didn’t disqualify them from the living-donor program.

Sharon worried at first, but she trusted her doctors. She loves her husband and wanted to help him.

They remained in the hospital a few days and then went to their daughter’s home to recuperate.

“I didn’t realize how bad I felt until after the transplant,” John said.

The couple urges others to research their options if faced with a similar situation and always get a second opinion.

John continues to take 28 pills per day to prevent organ rejection, but it’s preferable to dialysis, he said.

“We can be a lot more spontaneous,” Sharon said, “We don’t have to plan around his dialysis.”

“Yesterday we went to the Lily Pond” in Mill Creek Park “and he was able to walk all the way around it,” Sharon said.

He wouldn’t have been able to do that before.

John is grateful to his wife.

Mahoning Couty Board of Elections Director

Mahoning County Board of Elections Director, Joyce Kale-Pesta, will be inducted

March 29, 2016. Director Kale-Pesta is one of 5 distinguished women being

revitalization and the arts.

The other inductees include: Detrinalyn Benson, Suzyn Schwebel Epstein, 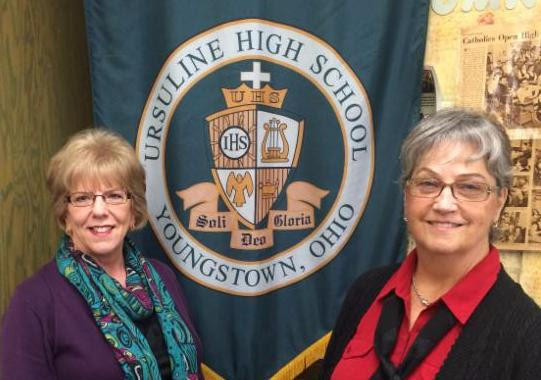 Pat Cullen Hanley and Mary Celeste Sturgeon Armbrecht, members of the Class of 1966, returned to Ursuline this week for a tour.  They have been friends since their grade school days at Saint Edward.  Mary Celeste was traveling through Youngstown on her way back to San Jose, California. Pat resides in Girard.

We then received the following email from Jerry Sweed ('66), one of the student managers in the photo.

Roy Nard (both boys and girls coach at Cardinal Mooney)

Keynote Media Group, a marketing and branding firm downtown, has launched a musical-instrument donation program to help needy students and schools in the area.

The “Let’s Start A Band!” initiative is designed to collect playable used band and orchestra instruments and get them in into the hands of young people who can’t afford to buy or rent them, said Richard Hahn, Keynote founder and CEO.

Hahn is a graduate of YSU’s Dana School of Music and former public-school music teacher.

“Arts funding continues to dry up, and poverty is on the rise, a perfect storm for the arts,” he said. “Many band directors I know, especially those in inner-city and rural districts, are feeling the effect.”

A number of inquiries have been received from adults who have their high-school clarinet or trumpet still in the attic gathering dust. Using social media as the main marketing strategy for the program, Hahn said he already has had a donation inquiry from Kentucky.

Keynote is accepting the instruments at its office at 201 E. Commerce St. The initial goal is two dozen instruments before the holidays. Hahn said that if things go well “we’ll continue the program after the first of the year.”

Once the instruments have been deemed playable, they will be cleaned and given either to the band director or to a needy family at the school’s recommendation. Any interested donors, school principals or band directors wishing to inquire about the program can go online to the Facebook page www.facebook.com/letsstartaband. 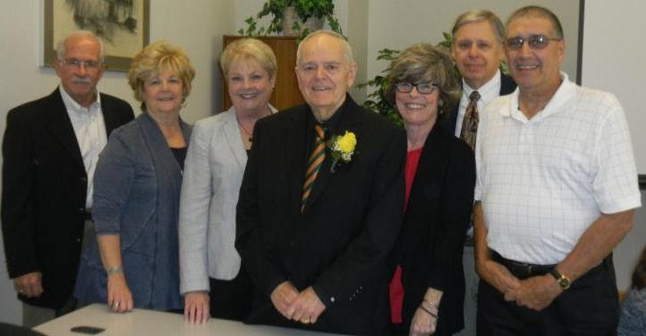 th Coleman Carroll '57 and John Ulicney '54 Receive Ursuline Distinguished Alumni Awards
The Feast of Saint Ursula was celebrated with a special Mass on Wednesday, October 21.  Following the liturgy, the Annual Distinguished Alumni Awards were presented to Ruth Carroll '57 and John Ulicney '54.  To receive this award, alumni must have distinguished themselves by service to Ursuline and/or to the community at large.  A complete story on Ruth and John will appear in the next Alumni Quarterly.
Above photo id:  Rich and Rosemary Schaffer LaCivita, Kathleen Cronin Conway, Mr. John Ulicney, Sharon Hoza Nicastro, Mickey Conway, Matt Giambattista 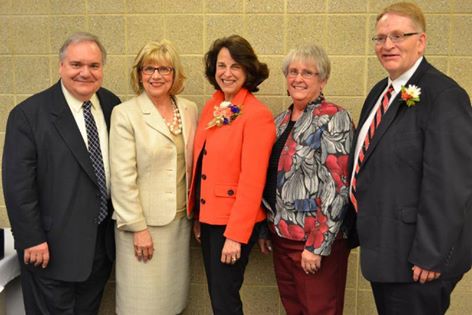 Two Ursuline Alumni were honored at the recent Youngstown State University Beeghly College of Education Outstanding Alumni Awards Ceremony. Carol Thomas Zink ('66) has been an educator with the Lincoln, Nebraska Public Schools for the majority of her career. Matt Manley ('79) is the Director of Professional Development and Principal at West Branch Middle School/Damascus Elementary.